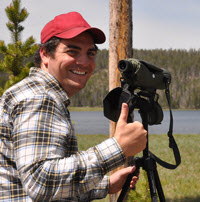 Common Loon research and conservation efforts over the last 40+ years have enabled these iconic birds to regain much of their historic range. On the crest of these efforts, in 2013 Biodiversity Research Institute (BRI) initiated the largest ever study of common loons, developing new techniques to strengthen and restore loon populations in three focal areas at the southern extent of the loon’s range. In Wyoming, BRI is working to better understand the state’s unique and isolated loon population while advancing conservation research and management of loons in the Greater Yellowstone Ecosystem. In southern Minnesota and southeastern Massachusetts, BRI is currently translocating chicks, a first in loon conservation, in an effort to restore loons to their former habitat. Additionally, BRI veterinarians are pushing the boundaries of wildlife health research through a comprehensive, multi-year health assessment of common loons across North America.

After earning his bachelor’s degree in business management from Wentworth Institute of Technology in Boston, Vincent began working in the energy industry for EnerNOC, Inc. While at EnerNOC he started a master’s degree in sustainability and environmental management at Harvard University. This field of study helped him realize that wildlife conservation was his true calling in life.

He left the energy conservation world to pursue wildlife conservation at the Loon Preservation Committee in New Hampshire as a Common Loon field biologist. After two seasons on scenic Lake Winnipesaukee, he shifted his focus to the recovery of the Massachusetts loon population for his master’s thesis research.

In 2013, Vincent joined Biodiversity Research Institute (BRI) of Portland, ME to study Common Loons as part of the Restore the Call project funded by the Ricketts Conservation Foundation. As the project leader for Wyoming he will spend summers in the Yellowstone and Grand Tetons region working to understand the decline of loons in that area and contributing to the larger goals of the project in western North America. He will also be a lead writer for the Loon Lines blog to inform the general public about BRI’s loon research and field work.

Vincent has been an NOC member since 2011.