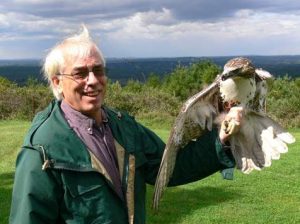 Tom French – 30 Years Following Peregrine Falcons to Recovery and Beyond

Tom discusses his work with Peregrine Falcons in the state, including the impact of raptor photography on knowledge of movements of banded birds. Tom chronicles the loss of nesting Peregrines in the state in 1955 through their current recovery to 32 nesting pairs. Tom provides many photos and stories of their nesting throughout the state. Their population is limited by nesting sites. Current sites include 5 cliff nests. Banding efforts have provided information on dispersal and longevity. Since 1987, 535 have been wild-born in Massachusetts.

In the mid-1970s he worked for National Audubon Society on a project to re-establish and manage colonies of Atlantic Puffin, Leach’s Storm-Petrel, and Arctic Tern in Maine. He banded over 2,000 Leach’s Storm-Petrels and probably can still smell them.

Tom headed back to school at Indiana State University, where he received a PhD in ecology and mammalogy in 1980. He followed that up with a postdoctoral stint at Cornell University and the New York Cooperative Wildlife Research Unit from 1980-1982.

He then served as a regional zoologist for The Nature Conservancy (Boston) from 1982 to 1984.

He has been the Assistant Director of the Massachusetts Division of Fisheries and Wildlife since 1984. He is responsible for the Natural Heritage and Endangered Species Program which carries out inventory, research, and restoration of state-listed rare species including restoration and management of Peregrine Falcon, Bald Eagle, Piping Plover, Roseate and Common Terns. He is famous state-wide for his work on banding over 450 Peregrine Falcons and many Bald Eagles.