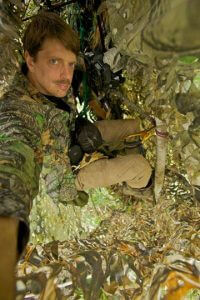 In the last couple years, Tim has made several expeditions to the Cape York Peninsula, Australia, photographing, filming, and doing biodiversity survey expeditions, focusing a lot around birds.  It is an area the size of Florida with less than 2000 people (compared to 20 million in FL). His longest expedition was a six-week trip by 4WD traveling all the way from Cairns to the tip of the peninsula. Some of the birds he concentrated on included the endemic golden-shouldered parrot nesting, palm cockatoos, magnificent riflebirds displaying, and bowerbirds, and copious waterfowl concentrations at waterholes in the dry season. He will combine stories of some of his adventures with the unique natural history of the region.

Tim Laman, wildlife photographer and field biologist, grew up in Japan where a poem he wrote in Japanese about his pet turtle won a school prize and possibly foreshadowed his career interests in wildlife and communication. A childhood spent in Japan’s mountains and ocean nurtured Tim’s zeal for exploration. He has spent the last 20 years on research and photography expeditions around the world, with a special emphasis on the Asia-Pacific region. In 2009 he was awarded the highest honor for a nature photographer in the U.S., the North American Nature Photography Association’s Outstanding Nature Photographer Award.

Tim regards the Birds-of-Paradise Project as his most ambitious work to date, both for the challenge of photographing so many species and because they live in such remote areas of New Guinea. But they are their own reward – the most spectacularly ornamented and extraordinary birds in the world. Joining forces with Ed Scholes in 2003, the pair spent nearly a decade on their quest. They were supported by the Cornell Lab of Ornithology, National Geographic Society, and Conservation International. In February 2007 they presented their work at the NOC members meeting.

Before the Birds-of-Paradise Project, Tim developed field skills as a researcher and as a photographer simultaneously. He did his PhD work at Harvard, spending field seasons in Borneo studying the ecology of rainforest canopies, particularly strangler fig trees and their associated wildlife. His work sent him climbing by ropes into the canopy on more than 500 climbs.

By the end of his PhD work, in 1997, he had become an expert tree climber and had acquired enough spectacular photographs to publish his first article in National Geographic. In the years that followed, he became a regular contributor to the magazine, publishing photos and articles from expeditions to Borneo, the Philippines, New Guinea, Africa, California, Japan, the South Pacific, and elsewhere. His work is frequently featured in GEO, National Wildlife, and Ranger Rick. He has been awarded by the BBC as Wildlife Photographer of the Year and has received other international awards as well.

Tim lives near Boston, Massachusetts, where his wife, Cheryl Knott, is a professor at Boston University. Cheryl works on orangutan research and conservation in Borneo, and Tim is a frequent collaborator. The National Geographic Society has been a longtime supporter of both Tim’s work and Cheryl’s research. In 2009, Tim and Cheryl cowrote a children’s book on orangutans.

In this video, Tim Laman narrates a slideshow about how he became a wildlife photographer, starting with his childhood.