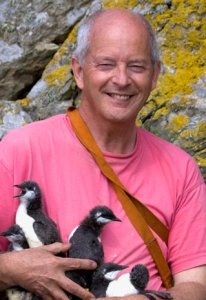 Tim Birkhead – How we know what we know about birds

We take so much for granted when it comes to birds, but where did our knowledge come from? Although people had been intrigued by birds since the palaeolithic, it was only with the scientific revolution the mid 1600s that a more certain ornithological knowledge began to emerge. This was thanks to the labours of two English pioneers, John Ray and Francis Willughby. Both scholars, but they could hardly have been more different: Ray careful and precise, Willughby the lateral thinker asking questions no one had preciously broached. The result of this extraordinary and exciting collaboration was an encyclopedia of ornithology that became the gold standard for over two centuries and provided the foundation on which all subsequent knowledge of birds rests. Their journey is our journey. We will travel across Europe as our two heroes, visiting other savants, libraries, museums and seabird colonies — including one, Skomer Island, Wales, where I have studied seabirds for the last fifty years.

Tim Birkhead is a Fellow of the Royal Society and emeritus professor of behaviour and evolution at the University of Sheffield. His research on promiscuity and sperm competition in birds helped to re-shape our understanding of bird mating systems. More recently, he and his colleagues also resolved the longstanding mystery of the guillemot’s pear-shaped egg: see: https://www.youtube.com/watch?v=e-189LIYa0Y&t=7s Tim has been president of the International Society for Behavioural Ecology and the Association for the Study of Animal Behaviour. He has studied guillemots — mainly on Skomer — since 1972 and has funded the annual monitoring of guillemot breeding success and survival on Skomer through crowd funding since 2014. As well as a passion for research, Tim enjoyed undergraduate teaching for which he won several national awards. He is also committed to the public understanding of science and has written several popular science books, including the award-winning Wisdom of Birds (2008), Bird Sense (2012) and The Most Perfect Thing: the Inside (and Outside) of a Birds’ Egg (2016), the last two of which were short-listed for the Royal Society’s Insight Investment Book Award. He is married and has three children and a dog, and in his spare time enjoys walking, birdwatching, playing the guitar, woodcarving and painting. He is currently writing Birds and Us — our relationship with birds from the palaeolithic to the present.