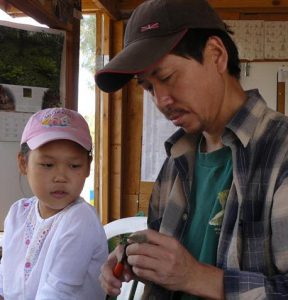 Dr. Gombobaatar, with MSc (1996) and PhD (2006) degrees, completed his post-doctorate program at Ben Gurion University, Israel, in 2007 – 2008 and Vienna Natural History Museum, Austria, in 2013 – 2014. He is presently a professor at the National University of Mongolia (NUM), where he has won several teaching awards.

Dr Gombobaatar has been involved in more than 30 research and conservation projects on a diverse range of birds of Mongolia. He is a professional bander and has visited German, British, Israeli and Japanese institutions. He has been lecturing and mentoring generations of young ornithologists in Mongolia for the last 20 years and is a well-known university teacher and bird conservationist.

Dr. Gombobaatar is also a well-known bird expert abroad and has served as biologist and ornithologist in multiple projects:

He is a founder and general director of the Mongolian Ornithological Society since 1999, a chief editor of the Ornis Mongolica journal and international coordinator and initiator of the Mongolian Bird Rarities Committee. He has conducted research on the Saker Falcon in Mongolia for a decade and completed his book, Saker Falcon in Mongolia in 2013. Recently, his challenge is to complete two large scale books, Birds of Mongolia and Birding Mongolia.