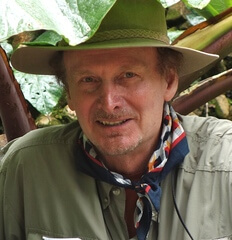 Steve Hilty – Colombia: Then and Now

The focus of this presentation is a look at Colombia and its remarkable biological diversity through the eyes of a young ornithologist, and his wife, as they struggled to carry out fieldwork in the early 1970s. This is followed by a look at Colombia’s unique ornithological history, and its fledgling ecotourism of the late 1970s and early 1980s. Although ultimately silenced for more than twenty years by drug-fueled violence, ecotourism has returned to Colombia and this presentation concludes with a look at the country’s efforts to rebrand itself to a new generation of ecotourists.

Steve Hilty is the senior author of A Guide to the Birds of Colombia and author of Birds of Venezuela, both by Princeton University Press, as well as the popular Birds of Tropical America, A Watcher’s Introduction to Behavior, Breeding and Diversity. He has also written a number of scientific papers on birds and plants, has described two species of birds new to science in Venezuela, and another, with a team of scientists, in Colombia. He also wrote the text and species accounts for the tanager family for the acclaimed Handbook of Birds of the World, published by Lynx Press in Barcelona.

Steve holds a PhD in zoology from the University of Arizona and has worked at the Arid Lands Department at the University of Arizona, as a consultant to The Nature Conservancy, and as a broker with Merrill Lynch. He is currently a research associate in ornithology at the University of Kansas Biodiversity Institute. Since 1983 he has worked for Victor Emanuel Nature Tours, guiding trips throughout North and South America, and co-leading trips to India, southeast Asia, and Australasian regions. With more than four decades of experience in South America and a wide range of natural history interests, he brings a unique breadth of expertise to his Neotropical tours. At night he often turns his binoculars towards the skies for stargazing. Steve lives in Kansas City with his wife, Beverly. They have two daughters.