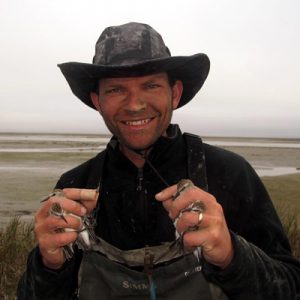 Each year tiny Semipalmated Sandpipers and their larger relatives make a tremendously difficult trip from their South American wintering grounds to their breeding territories in the Arctic.  In recent years the eastern population of Semipalmated Sandpipers has declined sharply and  Manomet scientists set out to discover why.  Traveling to a remote field camp on Coats Island in Northern Hudson Bay, we captured and tagged sandpipers with tiny tracking devices to discover their migration paths and specific wintering areas.  This presentation shows life in an Arctic field camp along with the incredible wildlife and landscape of the Canadian Arctic.

Shiloh Schulte holds a BS in Wildlife Biology from the University of Vermont and has worked on a variety of landbird, seabird and shorebird projects throughout North America. He earned his doctorate at North Carolina State University, where he studied the ecology and population biology of American Oystercatchers on the Outer Banks of North Carolina. During his time in North Carolina, he helped coordinate a coast-wide banding and resighting effort with multiple research partners.

Prior to his work at North Carolina State, Shiloh was part of the American Oystercatcher Aerial Survey Projectat Manomet from 2002-2003. In 2009, Shiloh Schulte returned to work at Manomet on the Shorebird Recovery Program.