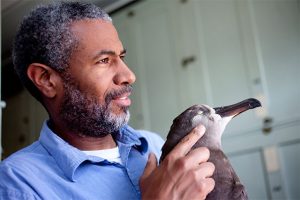 To view Professor Scott’s presentation, contact him directly by email.

Scott Edwards is Professor of Organismic and Evolutionary Biology and Curator of Ornithology in the Museum of Comparative Zoology at Harvard.

Scott’s interest in ornithology and natural history began as a child growing up in Riverdale in New York City. He received his undergraduate degree from Harvard in 1986. During his undergraduate years he spent 6 months volunteering at the Smithsonian’s National Museum of Natural History in Washington, DC, then gained his first field experience assisting with research on the natural history and conservation of native birds in Hawaii and northern California. After finishing his degree at Harvard, he enrolled in a PhD program at the University of California, Berkeley. During his first year as a graduate student, he spent 10 months in New Guinea and Australia, first volunteering in research on ecology of birds-of-paradise and later striking off on his own to embark on what would become his dissertation project, a study combining the genetics and population structure of a group of cooperatively breeding songbirds called babblers found throughout Australia and New Guinea. He received his PhD in 1992.

Scott did postdoctoral research on the evolution of disease resistance genes in wild birds at the University of Florida, Gainesville, working under Wayne Potts and Ward Wakeland. In 1994 he assumed an Assistant Professorship in the Department of Zoology at the University of Washington in Seattle, where he was also Curator of Genetic Resources at the Burke Museum.

He moved back to Harvard University in 2003 as a Professor of Organismic and Evolutionary Biology and Curator of Ornithology in the Museum of Comparative Zoology, where he continues efforts to unite genomics and natural history and involve students at all levels. His current major research interests include evolution and speciation of birds, genomic evolution during the transition from reptiles to birds; host-pathogen interactions and evolution in disease outbreaks; and statistical modelling of phylogeny and demography.

Scott Edwards has been an NOC member since 2007.