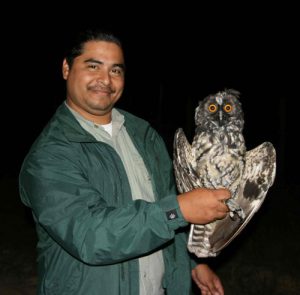 Roni Martinez was born in Belize and has always been submersed in nature. He worked as a natural history guide at Blancaneaux Lodge in Belize from 2004 until mid-2014. In 2009, he became Blancaneaux’s first Conservation Officer, the first such position in Belize. In this position, he worked along with many different researchers and conservation NGOs who share the same vision. Currently, his work involves research and collaboration on several projects with species including jaguars and birds, especially macaws and raptors. His work with other conservation organizations has been crucial in maintaining a proactive effort in conserving biodiversity in Belize. In May of 2014, he established his own NGO to work on the conservation of endangered species and his own birding company to raise funds needed for the several projects he works on.