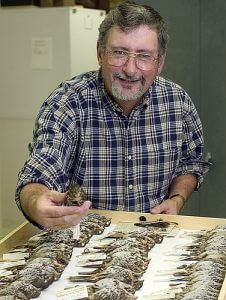 Robert M. Zink, leading scholar in avian evolution, holds the Breckenridge Chair in Ornithology and has served as Curator of Birds at the Bell Museum of Natural History and as Professor of Ecology, Evolution, and Behavior at the University of Minnesota.

Dr Zink earned his BS at University of Minnesota, Minneapolis, in 1977 and his PhD at University of California, Berkeley, in 1983. His research interests include evolutionary genetics of birds; evolutionary significance of geographic variation; speciation; phylogeny; phylogeography; and conservation genetics.

Among the recurrent themes in his work are: the tempo of avian diversification and speciation, the significance of vicariance events, and phylogeny. Two areas deserve special mention. The first is his role in creating a vigorous dialogue concerning the theory and practice of ranking taxa at the species and subspecies levels. In this debate, which has permeated ornithological thinking for more than a century, Professor Zink and coauthors have articulated the advantages and disadvantages of the species concept in both theoretical and applied situations.

The second has been the use of new technologies and analytical approaches in studying geographic variation. The discipline of phylogeography – focused at the interface of population genetics and systematic biology – is central to efforts to understand the origin and maintenance of biotic diversity. Professor Zink adopted this approach with his studies of Fox Sparrows and eventually incorporated information on plumage, skeletal morphology, the use of mtDNA restriction site digests and sequencing for these informative genes. This is probably the most comprehensive documentation in any bird species group. His use of multiple character systems is unparalleled and resulted not only in producing support for Bergmann’s Rule and other ecogeographic generalization, but also the template for modern studies of geographic variation.

He has also been instrumental in questioning the role of Pleistocene glaciation in the origins of many North American species, a subject that has been recently extended to Europe and Asia. He has also been forthright in throwing down the gauntlet to challenge current subspecific categories being used (and misused) in conservation biology.

Professor Zink’s work has been crucial in introducing new ideas to a wide audience. He continues a long tradition of ornithologists who have provided intellectual leadership in ornithology and in the larger community of evolutionary biologists. For his significant and continuing contribution to avian systematics, phylogeny, phylogeography, speciation theory and conservation, the American Ornithologists’ Union presents Robert M. Zink with the William Brewster Memorial Award for 2005.