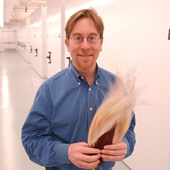 His recent research has focused on theoretical and molecular studies of the development and evolution of feathers, developing and applying new tools for the study of the physics and evolution of structural coloration, and continued efforts in phylogenetic ethology of polygynous birds. He has conducted field work throughout the Neotropics and in Madagascar, and has studied fossil theropods in China.