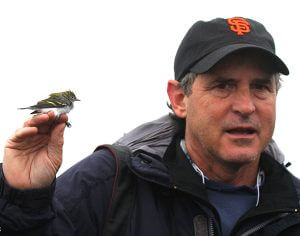 Bryan’s Shearwater (Puffinus bryani), was described as new to science by Pyle, A. J. Welch, and R. C. Fleischer in 2011, based on a specimen collected in February 1963 on Midway Atoll, Northwestern Hawaiian Islands. Peter will recount discovery of the new species and it’s etymology (named after his grandfather, long-time curator at the Bishop Museum in Honolulu), update information on seasonality, breeding habitat requirements, and vocalizations based on the 1963 and 1991 records, and review potential at-sea records of Bryan’s Shearwater in the North Pacific. He will also provide an up-to-the minute summary of detection and conservation efforts for Bryan’s Shearwaters in the Bonin Islands and elsewhere, including recent successful attempts to locate them with remote audio-recording devices designed by researchers at University of California, Santa Cruz. Bryan’s Shearwaters appear to be extremely rare and in need targeted conservation actions to increase their population size.

Peter Pyle is currently Research Scientist at The Institute for Bird Populations, Point Reyes Station, CA. His professional accomplishments are as follows.