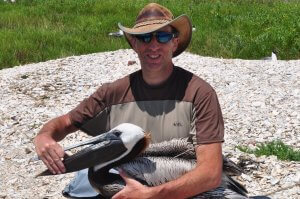 Pat Jodice – Searching Sea and Land for the Little Devil: The Ecology and Conservation of the Black-capped Petrel

The Black-capped Petrel or Diablotin, Pterodroma hasitata, is an endangered seabird endemic to the western North Atlantic. Once thought extinct it was rediscovered in 1963 when nests were located in the Massif de la Selle of southeastern Haiti. The species has a fragmented and declining population estimated at ca. 1,000 breeding pairs, nesting in underground burrows in steep ravines with dense understory vegetation. The only confirmed breeding sites (~100) are located in the mountain ranges of Hispaniola, where habitat loss and degradation are continuing threats. At sea, most of what is known about the range of the species is based on observations from vessel-based surveys in the Atlantic which primarily places the distribution between ~ 30 – 40 degrees latitude and west of the Gulf stream. Our lab has been conducting research on Black-capped Petrels since 2014 to better understand their ecology and contribute to conservation efforts. This presentation will review recent and ongoing research focused on satellite tracking birds in the Atlantic, improving models of nesting habitat in the Caribbean, and improving our understanding of the distribution of this species in the Gulf of Mexico, an area previously thought to be outside of its marine range.

Dr. Patrick Jodice is the Leader of the U.S. Geological Survey South Carolina Cooperative Fish & Wildlife Research Unit and a Professor in the Department of Forestry and Environmental Conservation at Clemson University. He has conducted research on seabirds and coastal birds for 20+ years in the southeastern US, Caribbean, Gulf of Mexico, Pacific Northwest, and Gulf of Alaska. His research focuses primarily on reproductive ecology, energetics, and foraging ecology. Current projects include Tracking Atlantic and Caribbean Seabirds (TRACS), investigating the spatial and reproductive ecology of brown pelicans in the Gulf of Mexico and Atlantic, and examining distribution, abundance, and ecological relationships of marine birds in the Gulf of Mexico as part of the Gulf of Mexico Marine Assessment Program for Protected Species. Dr. Jodice is currently Chair of the World Seabird Union and a member of the Steering Committee for the Gulf of Mexico Avian Monitoring Network. He has degrees from the University of Maine (BS), University of Florida (MS) and Oregon State University (Ph.D.). His research is available at www.atlanticseabirds.org and https://www.researchgate.net/profile/Patrick_JodiceFebruary.