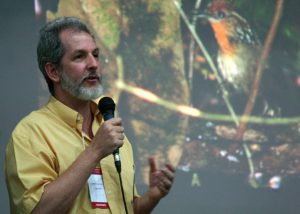 Nuttall Ornithological Club’s publication number 14 elaborated, in 1974, the most complete and carefully thought-out explanation for the marvelous patterns of distribution of Amazonian birds that has been proposed to this day. Its author, Jurgen Haffer, made a brilliant contribution to the field of South American biogeography that continues to be a powerful influence. But with new data, especially from the advance of molecular genetic techniques, some of Haffer’s assertions have fallen into discredit. We will explore the state of the art on this subject, becoming familiar with the unique features of avian biodiversity in the Amazon, and rediscover the genius of Haffer’s thinking and the lasting importance of that publication. Mario Cohn-Haft was born and raised in western Massachusetts, where an early love of nature and wild places eventually led to a career in ornithology. He is currently Curator of Birds and Staff Scientist at the Brazilian National Institute for Research in the Amazon (INPA), in Manaus, Brazil, where he has studied Amazonian birds since 1987.

Mario Cohn-Haft was born and raised in Northampton, Massachusetts, and moved to Williamsburg at age 14, where he took up birding. He did an undergraduate degree at Dartmouth College in biology and then spent some years as a research assistant in New England, Point Reyes Bird Observatory, and Long Point Bird Observatory before landing a job as a bird bander in Manaus, Brazil. After three years, he started graduate school in the US, earning a Master’s at Tulane Universoty with Tom Sherry and a PhD at LSU with Van Remsen, all involving research on Amazonian birds.

He headed back to Brazil as a post-doc and is now staff scientist and curator of birds at Brazilian National Institute of Amazonian Research (INPA). His research interests in Amazonian birds revolve around distribution and taxonomy, including results of expeditions and descriptions of new species. In 2013, together with colleagues, he published descriptions of 15 new bird species from the Brazilian Amazon in the Handbook of Birds of the World Special Volume. He has Masters and PhD students, is editor-in-chief of INPA’s in-house publishing section, organizes expeditions, and publishes regularly in scientific literature and on Brazilian and conservation blogs aimed at lay people.

In his spare time, he has worked as a bird trip leader for Field Guides in Brazil, got married to Rita Mesquita, a renowned Brazilian plant ecologist and conservation activist, and conducted a parallel life as a vocalist.