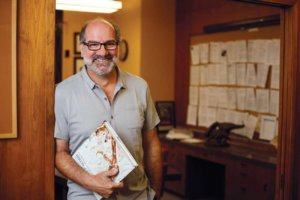 A tremendous amount of new fossils of early birds from the Age of the Dinosaurs has been unearthed in the last few decades. In his lecture, Dr. Chiappe will review the many new discoveries related to the early evolution of birds, and how these developments help us understand the origin of the unique attributes of living birds. Chiappe will show stunning examples of birds with long bony tails, teeth, and wing claws, and explain how these fossils bring clarity to the 150 million-year-long evolutionary saga of birds.

As the head of the Research and Collections Department of the Natural History Museum of Los Angeles County (NHMNLAC), Dr. Chiappe oversees the research programs of more than 25 PhD scientists and the vast biological, geological, and cultural collections of NHMLAC. A vertebrate paleontologist and the Gretchen Augustyn Director of the Museum’s Dinosaur Institute, Dr. Chiappe has conducted extensive research on the evolution of dinosaurs, from their reproductive behavior to their evolutionary connection with birds. He is considered to be one of the world’s authorities on the early evolution of birds. One other important focus of his is science communication, conveying the relevance of NHMLAC’s scientists’ discoveries to the media, the public, and Museum visitors.

Chiappe’s commitment to public communication is reflected in the Museum’s Jane G. Pisano Dinosaur Hall, an award-winning permanent exhibition that he curated about the nature of science and the lives of dinosaurs, as well as in his many popular books and articles. Chiappe¹s research has been published in more than 180 scholarly articles. He is the author of Walking on Eggs, Glorified Dinosaurs, and Birds of Stone. He is also a J. S. Guggenheim Fellow, a Humboldt Awardee, and a professor at the University of Southern California.