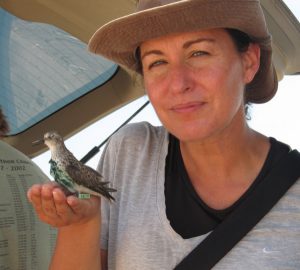 Kim Peters – How Airfields in the Northeast Can Provide Benefits to Grassland Birds, Maintain Aircraft Safety and Support Broad-scale Conservation for Declining Species

Species associated with grasslands and other open spaces represent one of the most imperiled and rapidly declining groups of birds in North America.  The Northeastern U.S. is increasingly being recognized as an important source of breeding habitat.  For grasshopper sparrows, upland sandpipers, and eastern meadowlarks, airfields provide the some of the largest breeding sites in the Northeast and can play a significant role in maintaining local breeding populations.  Kimberly Peters and her colleagues at New Jersey Audubon have been studying the benefits from proper management of vegetation proximal to airfields for over a decade, particularly as they relate to risk of bird-aircraft collisions and habitat enhancement for grassland species of conservation concern.  Their findings suggest that conflicts between conservation and safety objectives may not be as certain as once believed, and that airfield managers can potentially provide a conservation benefit to vulnerable grassland birds without increasing risk from problem species.

Kimberly Peters is a conservation biologist with over 20 years of experience working with terrestrial and coastal birds. Kim previously served as Chief Scientist and Director of Bird Conservation at Mass Audubon (2011 – 2014) and as a Senior Scientist and Director of Bird Monitoring at New Jersey Audubon (2005-2011). Her main research interests are in avian habitat selection, migration ecology, disturbance ecology, and animal behavior and monitoring methodology, with a particular focus on addressing issues at the human-wildlife interface. She has served as principal investigator on various projects including an evaluation of Swainson’s Warbler habitat suitability within a managed bottomland hardwood system, a study of the effects of recreational disturbance on non-breeding shorebirds in South Carolina, a large-scale collaborative study of shorebird ecology in the Delaware Bay and northern South America, and several terrestrial wind-power studies. She also developed and directed a regional-scale grassland bird research program to examine avian response to management on commercial and military airfields.

Kim currently serves as Visiting Assistant Professor at Wheaton College and as an independent contractor working with the Vermont Center for Ecostudies and the US Fish & Wildlife Service to develop full life-cycle conservation plans for Bobolink and other grassland birds. Kim holds a BA from Boston College, an MS from North Carolina State University, and a PhD from Clemson University.