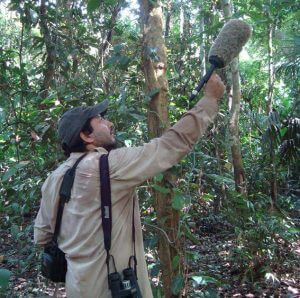 Bolivia has 17 endemic bird species and 14 near endemics. The largest number of endemic bird species of the country are concentrated in the central-western region of Bolivia, in the Andes. There are seven species in the Interandean Dry Valleys Ecoregion and seven in the Yungas ecoregion. There are fewer endemics in the lowlands; the Llanos de Moxos has two and the Amazon Ecoregion has one.

Of the 1420 species of birds recorded in Bolivia, 221 species of birds from 1420 that exist in Bolivia were evaluated for the Red Book of Vertebrates in Bolivia: Seven Critically Endangered (CR), 10 Endangered (EN), 25 Vulnerable (VU), 28 Near Threatened (NT), 89 Lower Concern (LC), and 62 as Data Deficient (DD). So, 42 species of birds have some degree of threat. Habitat loss due to agriculture and introduced plants and removal of individuals from the population for pets or food constitute the major threats.

José Antonio Balderrama Torrico was born in La Paz, Bolivia in 1974. A biologist with an MSc in Environmental Sciences, José has been dedicated to the study and conservation of birds from an early age. He has surveyed bird communities throughout the country in all of its nine departments, resulting in several important distributional records, and published a number of notes and articles in both scientific and popular outlets in Bolivia as well as in international scientific journals. He also authored two local Cochabamba bird identification guides and is coauthor of other books in preparation.

José has worked on several projects with Asociación Armonía, is a research associate of the Centro de Biodiversidad y Genética and instructor of the Avian Systematics undergraduate course at the Universidad Mayor de San Simón, Cochabamba, and president of the Asociación Boliviana de Ornitología.