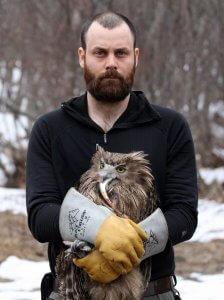 From 2006-2010, Jonathan Slaght studied Blakiston’s fish owls in Russia for his PhD degree in Wildlife Conservation at the University of Minnesota. These enormous and endangered salmon-eaters live in some of the hardest-to-reach corners of northeast Asia, on the fringes of human civilization. Slaght’s memoir of this experience, called “Owls of the Eastern Ice,” was published in summer 2020 to acclaim. It was a New York Times “Notable Book for 2020”, longlisted for a 2020 National Book Award, one of the Wall Street Journal’s “Ten Best Books of 2020,” and winner of the 2021 PEN/E.O. Wilson Literary Science Writing Award. Here, he will describe the owls and his project, including details of the adventures and struggles of fieldwork, and on-going conservation efforts with this endangered species.

Jonathan Slaght is the Russia & Northeast Asia Coordinator for the New York-based Wildlife Conservation Society (WCS). He manages research projects involving endangered species such as Blakiston’s fish owls and Amur tigers, and coordinates WCS avian conservation activities along the East Asia-Australasian Flyway from the Russian Arctic to the mudflats of Southeast Asia. Dr. Slaght’s writings, scientific research, and photographs have been featured by the BBC World Service, the New York Times, The Guardian, Smithsonian Magazine, The New Yorker, and Audubon Magazine, among others.