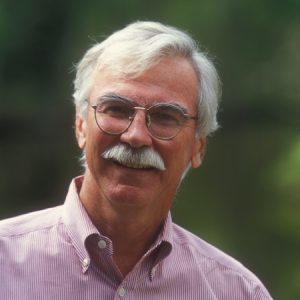 John Fitzpatrick – Reflections on American Ornithology, Past, Present, and Future

John Fitzpatrick became the Louis Agassiz Fuertes Director of the Cornell Laboratory of Ornithology in August 1995. He received his BA from Harvard in 1974 and a PhD from Princeton in 1978.

From 1988 to 1995, John was executive director and senior research biologist at the Archbold Biological Station. From 1978 to 1988 he was at the Field Museum of Natural History in Chicago, where he was curator of birds and chairman of the Department of Zoology; he also held an appointment as senior lecturer at the University of Chicago.

Dr. Fitzpatrick’s current research focuses on the ecology, conservation biology, and population genetics of the endangered Florida Scrub Jay. His book, Florida Scrub Jay: Demography of a Cooperative-breeding Bird earned him a William Brewster Award, the highest research award given by the American Ornithologists’ Union. He also studies systematics and biogeography of South American birds. He co-authored Neotropical Birds: Ecology and Conservation, and was a major contributor to volume 9 of the Handbook of Birds of the World.

During his extensive fieldwork in South America in the 1970s and 1980s, John discovered and described seven bird species that were new to science. He is a Fellow of the American Ornithologists’ Union, served as its president from 2000 to 2002, and spent fifteen years on the AOU’s Committee on Classification and Nomenclature, culminating in the production of the 7th Edition of the AOU Checklist of North American Birds. He is on the U.S. Fish and Wildlife Recovery Teams for the Alala (Hawaiian Crow) and the Florida Scrub Jay (Recovery Team Leader). He was trustee chair for Florida’s chapter of The Nature Conservancy and then spent 11 years on The Nature Conservancy’s national board of governors. Today he is trustee of TNC’s Central and Western New York Chapter.

John and his wife, Molly, have a home overlooking Ellis Hollow and Cascadilla Creek in Ithaca, New York. Their daughter Sarah (Cornell ’08) is a grad student in evolutionary biology at Colorado State University, and their son Dylan (Middlebury ’11) is an economic analyst for Industrial Economics, Inc. in Cambridge, MA.