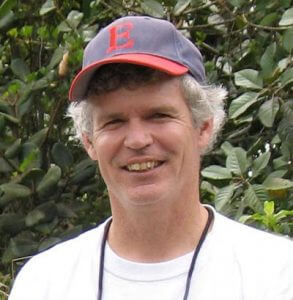 John Bates – The Wonders and Tribulations of Africa’s Albertine Rift: Biodiversity, Science and People in a War Zone

The Albertine Rift in central Africa possesses some of the richest biodiversity and highest endemism on the continent and yet it is still poorly known. It is has also been a region of tremendous human conflict. Despite these issues, this is a beautiful area and John Bates and his Field Museum colleagues have, for the last 10 years, worked with Congolese scientists to increase knowledge and understanding of biodiversity in the region and build regional capacity to study and conserve that biodiversity. Bates introduces this incredible region and the dedicated people who live there, along with discoveries that are coming out of their research.

John Bates is an Associate Curator of Birds and head of the Life Sciences section of Integrated Research at the Field Museum in Chicago and an Adjunct Professor in the Department of Biological Sciences at the University of Illinois. He also holds academic and reserch positions in Uganda and the Democratic Republic of the Congo.

John grew up in Tucson, Arizona, and fell in love with the tropics at an early age. He holds a BS and an MS from the University of Arizona and a PhD from Louisiana State University. He was a postdoctoral fellow at the American Museum of Natural History.

He has spent 20 years as a curator in Chicago, where he and his students have studied genetic structure in the tropics in Africa, South America, and Asia to understand the patterns and processes underlying diversification at the tips of tree of life: the realm of species and populations.