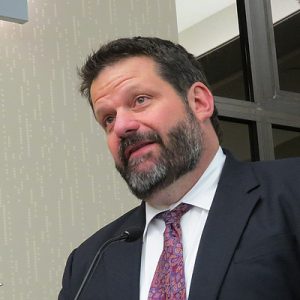 Jeff Gordon – How Birding Can Save Your Life and Maybe, Just Maybe, Save the World

Alvaro Jaramillo has said that if golf is a good walk spoiled, then birding is a good walk perfected.  It’s such a simple, compelling, positive message.  But that positivity is something that birders as a community have relatively rarely managed to convey.  Why is it that with as great a “product” to sell as the redemptive power of a passionate curiosity about nature and belonging to community of some of the most interesting, caring people anywhere, we’ve made so little traction with the wider public?  Join American Birding Association President Jeffrey Gordon for a celebration of the power of birding to heal and transform, not only our own lives but even our world.

Also at this meeting, Alan Keith was presented with the Claudia Wilds Award.

Jeffrey A. Gordon has worn many hats in the birding world: author, photographer, speaker, tour leader, and beginning in November of 2010, president of the American Birding Association. He served as field editor for Bird Watcher’s Digest and as interpretive naturalist at national parks including Yosemite and Acadia and wildlife refuges including Santa Ana NWR in South Texas. He has led birding tours full or part time for the past 20 years and authored 11 of the chapters in ID Yourself: The Fifty Most Common Birding Identification Challenges. There’s very little about birds, birding, and birders that he doesn’t find fascinating, though he’s especially interested in birding culture and the many ways we all communicate our passion for birds.