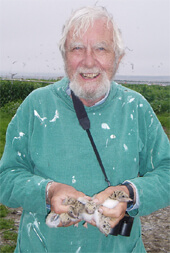 Ian Nisbet, NOC member since 1975, is an independent tern researcher who has been the primary monitor for the Roseate Tern and Common Tern colonies in Buzzard’s Bay, particularly at Bird Island.

Dr Nisbet was born in the UK and received his PhD in physics at Cambridge University in 1957. He moved to Massachusetts in 1968 and began studying Common and Roseate Terns in 1970. He was on the scientific staff of Massachusetts Audubon Society for several decades and was involved in the research that led to the gradual banning of the sale of chlorinated pesticides in the 1970s in this country.

Dr Nisbet and his wife Shirley reside in North Falmouth on Cape Cod.