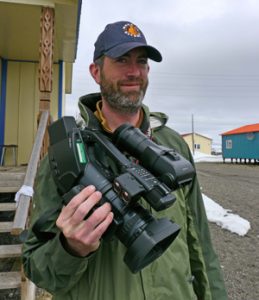 Gerrit Vyn – Chasing a Unicorn: Expeditions to Capture the First Comprehensive Media of the Spoon-billed Sandpiper

Gerrit Vyn is a Seattle-based photographer deeply committed to conservation and connecting people more intimately with the myriad creatures sharing this miraculous and fragile planet. His work often focuses on birds because they are powerful and visible indicators of environmental health and change.

Gerrit’s images have been used by most major conservation organizations and appear regularly in books and magazines including National Geographic, Audubon, Living Bird, BBC Wildlife, Natural History, National Wildlife and New Scientist. He was the primary image provider for the 2009 and 2011 State of the Birds reports that were delivered to the Obama administration and Congress by a coalition of leading environmental organizations.

As a natural sound recordist, Gerrit has contributed thousands of recordings to the Macaulay Library collection at Cornell University and has produced and authored two CD compilations, Voices of North American Owls and Bird Songs of the Pacific Northwest. His audio and video work have been featured on radio and television programs including NPR’s Morning Edition, PRI’s Living on Earth, Birdnote, PBS News Hour and CBS Sunday Morning.

Gerrit is a producer for the Cornell Lab of Ornithology and an Associate Fellow of the International League of Conservation Photographers (iLCP).