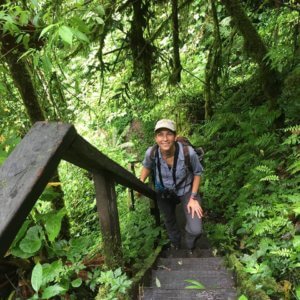 Emily DuVal – Dancing Birds, Sexual Selection, and the Evolution of Cooperation in a Tropical Forest

Males of many species engage in fierce competition for mates.  That competition can take the form of intense battles with rivals or flashy displays that attract females, but in just a few species, males do something truly unusual:  instead of competing, they cooperate.  Male lance-tailed manakins form long-terms two-male partnerships and display together for females, but only dominant “alpha” males mate with the females a pair attracts. It has long been assumed that cues from the dynamic multi-male displays are a key part of mate choice, but we’ve found that displays are more likely to end with a copulation when males don’t have their display partner around.  Why do males cooperate, and what are females looking for, anyway?  Drawing on 20 years of empirical research into lance-tailed manakin cooperation and mate choice, she will explore the astounding behaviors that have resulted from intense sexual selection while questioning long-held assumptions about how sexual selection works.

Emily DuVal earned her B.A. in Biology and Sociology at Rice University, and first became involved in ornithological research as a freshman collecting data on great-tailed grackle mating systems (a project that she took part in for all four of her undergraduate years).  Following graduation, she traveled as a Thomas J. Watson fellow to study conflicts between conservation and cultural traditions in Guyana, Australia, and New Zealand, and she started studying lance-tailed manakins in her first year of her PhD at the University of California, Berkeley, where she was supervised by mammologist Eileen Lacey.  She did a postdoc with Bart Kempenaers at the Max Planck Institute for Ornithology in Seewiesen, Germany, and in 2008 she moved to a faculty position at Florida State University where she is now an associate professor.