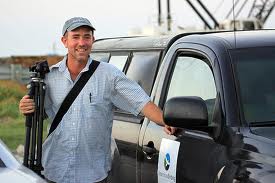 Drew Wheelan, who grew up in southern Rhode Island, graduated from Evergreen State College in 1996 and since then has worked with birds throughout the United States, Amazonian Peru and Ecuador, as well as Panama, Costa Rica and Mexico.

A fight with a life threatening illness lent to him a fresh perspective on life and also led him away from a life in academia. Since 2000 Drew has continued to work with birds, but has broadened his scope to include fisheries work, in research as well as harvesting. This work has included studies in salmon ecology and habitat on the east slope of the Washington Cascades as well as lobster recovery in New England following the north Cape oil spill.

Drew’s unique blend of experience and desire to write are combined in his reporting on the Gulf oil disaster. Drew has strived to report on what he has seen with an objective and truthful voice since arriving in the Gulf on May 16th to report for the American Birding Association on the spill’s effects on birds and bird habitat.