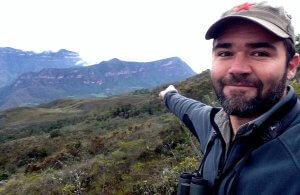 Diego Calderón-Franco – Colombia: A Plethora of Birds New to Science

Diego Calderón-Franco was born in Medellín, Colombia and studied biology at the Universidad de Antioquia. He has been involved in exploring poorly-known, remote areas in the Neotropics with an emphasis on Colombia. He has been active in central Andes exploration and bird survey work, several audio recording projects, and research on manakin display behavior in Ecuador, Cerulean Warblers migration in Honduras and Colombia, and systematics in Galliformes and Anseriformes. He has an impressive list of publications in international journals.

In 2007, Diego began leading birding tours and now has his own company, Colombia Birding. He has led birding trips all over Colombia with an emphasis on the Andes, and has recently branched out into Panama and Brazil.