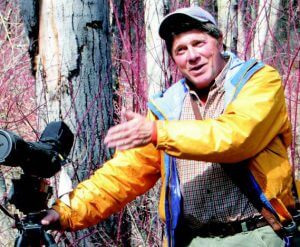 Denver Holt, a graduate of the University of Montana, is founder and president of the Owl Research Institute (ORI), a nonprofit organization located in Charlo, Montana. A dedicated field researcher in North and Central America, Holt believes that long-term field studies are the primary means to understanding trends in natural history. In 2000, he was named Montana’s “Wildlife Biologist of the Year”, by the Wildlife Society of North America.

Since 1978, Holt’s focus has been researching owls and their ecology. He has published more than 80 papers and technical documents, including three species accounts for Birds of North America. He was also team leader for family Strigidae (owl species) accounts for The Handbook of the Birds of the World, volume 5, covering 189 species of the world’s owls. In collaboration with elementary school teachers, he has co-authored two children’s science books on owls: Owls: Whoo Are They, and Snowy Owls. In 2006, he was a chapter author on owls for Arctic Wings, highlighting the birds of the Arctic National Wildlife Refuge, Alaska. The forward was written by former United States President Jimmy Carter. The book has won the prestigious National Outdoor Book Award for Design and Artistic Merit.

Holt’s research has been acknowledged by the media, including a cover story for National Geographic Magazine in December 2002. His work has been the subject of many television bites on ABC, CBS, NBC, CNN, and Disney, as well as featured on Audubon’s Up-Close series, PBS’s Bird Watch, and David Attenborough’s Life of Birds, among others. His research on Snowy Owls has been showcased on documentaries for National Geographic Explorer, NHK Natural History Unit of Japan, and the Norwegian Broadcasting Company Natural History Unit. His Snowy Owl research has been the focus of the British Broadcasting Company’s (BBC) new documentary series called Frozen Planet, a sequel to the highly acclaimed Planet Earth series. In May 2011, Holt’s research was featured in The New York Times. In 2011, Holt worked closely with a PBS documentary film crew featuring Snowy Owl breeding ecology in the Arctic. This show airs in 2012. The New York Times again cited Holt’s research in January 2012, highlighting the 2012 Snowy Owl irruption.