Dr. David Wiley and Kevin Powers will discuss their research on Great Shearwaters. For the past three years the Stellwagen Bank National Marine Sanctuary’s science team and collaborators have placed satellite tags on Great Shearwaters to investigate patterns of habitat use, long range movements and bycatch in commercial fisheries. The team is also investigating food habits using stable isotope analysis of feather, blood and exhaled gas samples from captured birds.

Dr. Wiley received his PhD in Environmental Studies from Antioch University with a focus on environmental decision-making and conservation biology. His research has ranged from studying the reproductive and foraging ecology of endangered whales to mapping marine toxic or hazardous dumpsites. He has worked with fishermen to redesign fishing gear to reduce the risk of whale entanglement and pioneered methods to successfully rescue mass stranded whales and dolphins. His research led to the shifting of shipping lanes into the port of Boston as part of an international effort to reduce the risk of ship strikes to endangered whales. He is the recipient of numerous awards including a Switzer Environmental Leadership Award, Gulf of Maine Visionary Award, and the Society for Marine Mammalogy’s award for Excellence in Scientific Communication. He has been recognized as NOAA’s Employee of the Year for science and Office of National Marine Sanctuary’s Science Team of the Year; and awarded the US Department of Commerce Individual Gold Medal for Scientific Leadership.

Currently he is leading a multi-organizational study using advanced telemetry and novel visualization software to explore the underwater behavior of endangered whales. His results have appeared in numerous scientific journals ranging from Animal Behaviour to Conservation Biology.

He and his family spent much of 2011 in New Zealand conducting research on marine protected areas as part of an Ian Axford (Fulbright) Fellowship. His research has been featured on the Discovery Channel, BBC documentaries, National Geographic channel and National Public Television and Radio. He was profiled in the recently published Wildlife Heroes as one of the 40 top wildlife conservationists of our time. He is also adjunct faculty in the College of Science and Mathematics at the University of Massachusetts Boston. 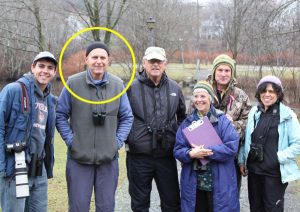 Kevin Powers’ career began in field biology in 1976 with the U.S. Fish & Wildlife Service in Anchorage, AK, where he helped in cataloging coastal seabird breeding colonies on the Alaskan Peninsula as part of an Outer Continental Shelf Biological Assessment Study prior to the completion of the Alaskan oil pipeline. Later, Powers was a scientist at the Manomet Bird Observatory (1976 – 1983) in Manomet, MA, where he studied the distribution and abundance of marine birds on the continental shelf of the Northwest Atlantic. During that time he described the effects of the Argo Merchant oil spill on marine bird populations off the New England coast in 1977. He authored several publications on the distribution, abundance and ecological role of marine birds in the Gulf of Maine (including Stellwagen Bank), Georges Bank and mid-Atlantic Bight. In 1982 he collaborated with R.G.B. Brown (Canadian Wildlife Service) on a publication that described seasonal range and abundance of marine birds in shelf waters from Cape Hatteras to the Scotian Shelf. During his time at MBO he also participated in seabird surveys in the Labrador Sea, Hudson Strait, Hudson Bay and Bering Sea.

Mr. Powers received his BA (Biology) from the University of Connecticut and his MS (Forestry and Wildlife Management) from Louisiana State University. He served on and was chairman of the Conservation Commission in Worcester, MA (1984 – 1986). He is a member of the Stellwagen Bank National Marine Sanctuary Advisory Council (SAC), Massachusetts Natural Heritage & Endangered Species Program Advisory Committee and Nuttall Ornithological Club.

Mr. Powers retired recently after 30 years as an engineer in the disk drive industry. He currently lives in Plymouth, Massachusetts.