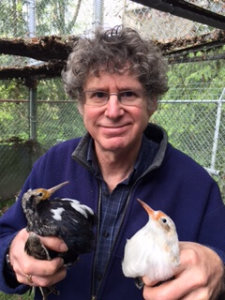 David Lank – Competition, cooperation, and deceit among three male morphs of ruffs and the females that choose to mate with them: is this the most complex avian mating system?

Ruffs (Philomachus [or Calidris, if you prefer] pugnax) have the most complex mating system of any bird in the world.  Three genetically distinct types of males, with different morphologies and mating strategies, attempt to mate at leks with as many females as possible.  Most highly ornamented males fight, but others are somewhat cooperative, and small unornamented males mimic female morphology and behaviour.  Nearly all ornamented males carry individually distinctive plumage coloration and patterns.  How and why did this hyperdiversity in behaviour and morphology evolve, and how does it persist?  A chance chromosomal mutation 4 million ago started this unique situation, but it persists through complex social interactions.  Uneasy alliances occur between certain males despite their fundamental competition for mates.  Although there is strong sexual selection, with many females choosing to mate with particular males and most males mating with none each year, all three morphs and the extensive plumage variation persists.  What has thwarted directional selection for one type of male in this case?  My talk will cover genetics, development, identity signals, mate choice, and the social behavior that maintains these complex polymorphisms.

David Lank started studying shorebirds during the summer of 1972, when he demonstrated the use of star compasses by migrant semipalmated sandpipers for his undergraduate thesis research at Marlboro College, Vermont.  Following a MSc at the University of Minnesota and PhD at Cornell on the behavioral ecology of sandpipers at migratory stopover sites, he joined Lew Oring to study polyandry in spotted sandpipers.  In 1984 he began fieldwork on the complex mating system of ruffs, which continues to this day, including work with a captive breeding flock since 1985.  Following a decade as a researcher at Queens University, Ontario, he is now at Simon Fraser University, Vancouver BC, Canada, where he has supervised research on the breeding biology of western sandpipers and phalaropes, migration and non-breeding season biology of shorebirds in British Columbia, Mexico and northern South America.  His more recent research has emphasized the role of the change in ‘danger landscapes’ brought about by resurgent raptor populations on the migratory and non-breeding biology of shorebirds.