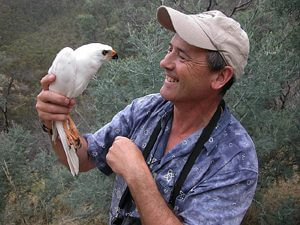 Professor of Wildlife Biology and Director of the Avian Science and Conservation Centre of McGill University, Montreal, Canada, Dr. DavidBird’s main research interest is focused on raptorial birds, which encompasses virtually all aspects of their biology. He has at his disposal a captive colony of 200 or more American Kestrels. He collaborates with other scientists in areas of toxicology, reproductive physiology, as well as with endangered species research and participates in recovery programs for endangered Peregrine Falcons and Loggerhead Shrikes.

Dr Bird has world-wide contacts in ornithology and is also interested in human-bird interactions, e.g. control of nuisance wildlife, impact of ecotourism, development, golf courses, etc. on wildlife. His most recent research interest includes application of Unmanned Aerial Vehicles (UAV) to wildlife studies. He is past president of the Raptor Research Foundation Inc.; current President of the Society of Canadian Ornithologists, past member of the board of directors of the American Birding Association, was elected a Fellow of the American Ornithologists’ Union in 1996 and a Member of the International Ornithological Committee in 1998.

Dr Bird has much experience in the area of public relations; he produced a weekly nature report for CFCF-CTV, a major English television network in Quebec, for 3 years; produced television reports for The Discovery Channel (Canada) in 1995; wrote a monthly column on birds in The Gazette, Quebec’s only major English newspaper; writes four columns on birds for the bimonthly magazine, Bird-Watchers’ Digest, and associated newsletters, Backyard Bird News and News on the Fly. He has also done several hour-long phone-in shows on wildlife for CJAD annually and produced a weekly nature column on CJAD radio for 45 weeks in 1995. He founded and organized the Montreal Bird Festival in May 2000.