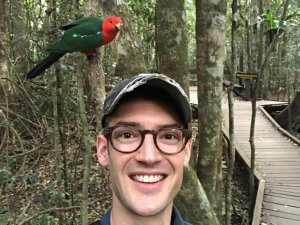 Daniel Field – The Dinosaur Resurrection: How the Demise of the Dinosaurs Paved the Way for the Origin of Modern Birds

Daniel Field is a lecturer in the Earth Sciences Department at Cambridge, and the Strickland Curator of Ornithology at the University of Cambridge Museum of Zoology

Modern birds are the most diverse group of terrestrial vertebrate animals, comprising nearly 11,000 living species. They inhabit virtually every corner of the modern world, and exhibit a mind-boggling variety of forms and lifestyles. But how has this awe-inspiring diversity arisen? This talk will explore recent research into how, where, and when the spectacular diversity of living birds, their specialised features, and their extraordinary phenotypic variety have evolved. This exploration will reveal how new fossils, advanced visualisation techniques, and a wealth of new phenotypic and genomic data are providing important new insights into these longstanding evolutionary questions. Advances in all of these areas point to a key event in Earth history as having kick-started the radiation of modern birds: the extinction of the giant dinosaurs. Our research illustrates that the end-Cretaceous mass extinction event nearly wiped out birds alongside their dinosaurian brethren, but the interval immediately following this mass extinction event appears to have witnessed the extremely rapid diversification of modern birds—giving rise to the early ancestors of the major groups of birds alive today. We will seek to unravel the effects of this mass extinction on avian ecology, anatomy, and diversity, and will explore how the recent discovery of the world’s oldest modern bird fossil informs our understanding of the earliest stages of modern bird evolutionary history.

Daniel Field’s research bridges the worlds of avian palaeontology as a lecturer in the Earth Sciences Department at Cambridge, and evolutionary biology as the Strickland Curator of Ornithology at the University of Cambridge Museum of Zoology. He is fascinated by Earth’s living bird diversity, and seeks to understand how modern birds evolved using the fossil record. Daniel’s academic interests were sparked as a bird- and fossil-obsessed child growing up in Calgary, Canada, and since arriving at Cambridge in 2018 his lab has investigated bird evolution on a grand scale—covering over 150 million years of Earth’s history. Daniel also holds a fellowship at Christ’s College, where Charles Darwin studied as an undergraduate.