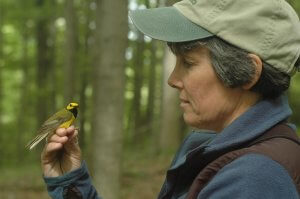 Bridget Stutchbury – Why Is Tropical Bird Behavior So Different?

Bridget Stutchbury is Professor in the Department of Biology at York University, Toronto

Dr. Bridget Stutchbury explores why the tropics is a unique natural laboratory that has led to unusual and varied bird behavior compared with temperate-breeding species. A large majority of research on bird behavior has focussed on North American and European breeding birds, largely out of convenience. Over the past few decades, research on tropical birds has surged because so many species are highly threatened. It is a race against time to understand the many evolutionary quirks of tropical birds including year-round and stable territories, equal sex roles in parenting, females who sing and are brightly colored & aggressive, and males who dance together to attract females. We also are beginning to understand how behavior helps or hinders tropical birds when their forests are fragmented and their climate changes.

Bridget Stutchbury is a Professor in the Department of Biology at York University, Toronto. She did her M.Sc. at Queen’s University, her Ph.D. at Yale and was a postdoctoral fellow at the Smithsonian Institution in Washington DC. Since the 1980s, she has studied songbirds to understand their behavior, ecology and conservation but has also witnessed first-hand the shocking declines of many species such as tree swallows, bobolinks, and wood thrushes. Dr. Stutchbury has studied the behavior of tropical birds in Panama and the incredible migration journeys of North American songbirds who winter in the tropics. She is author of Silence of the Songbirds (2007) and The Private Lives of Birds (2010) and was featured in the The Messenger, an award-winning 2015 documentary on songbird declines. Her most recent book Behavioural Ecology of Tropical Birds 2nd edition (2022) was written for an academic audience, but every naturalist will delight in new discoveries.