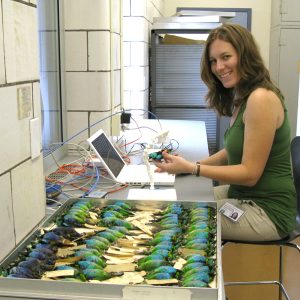 Human-mediated introductions of species into new environments are common today with the ease of global travel, whether they be accidental or intentional. It is critical to understand the genetic effects these introductions have on the new populations as they adapt to their environment and face novel challenges, including diseases. The House Finch, a species native to southwestern North America, was introduced to the East Coast in 1940 and infected by a previously poultry-associated bacterium in 1994. Here, I present results from cutting-edge molecular techniques that shed light on the genetic impacts of the introduction on the eastern population, and how it has evolved in response to the novel pathogen.

Allison Shultz is currently a candidate for PhD in Organismic and Evolutionary Biology at Harvard University. Dr. Scott Edwards is her advisor and she expects to receive her degree in May 2016.

As part of her PhD work in phylogeography and genome evolution of the House Finch, Shultz is using genomic tools to address questions about avian population genetics and evolution. The House Finch, an important study species in behavioral and disease ecology native to the western United States and Mexico, was introduced to Hawaii and the eastern United States in about 1870 and 1940 respectively, where the populations quickly expanded. In about 1994, the eastern population was colonized by the bacterium Mycoplasma gallisepticum (MG). While upon first exposure this bacterium was deadly to House Finches, they since have evolved resistance and tolerance. This bacterium has now infected individuals from almost the entire range, and provides an opportunity to study what effect this strong selective pressure had on the genome.

Shultz is currently using Rad-tag sequencing on historical samples to study the phylogeographic patterns of this species before exposure to the epizootic. Building upon this work, she is using whole genome resequencing of populations before and after exposure to MG to learn about the types of selection (hard sweeps, soft sweeps, etc) and identify innate immune pathways and genes that were targets of selection. She is also investigating changes in the MHC and Toll0like receptor loci specifically, as these genes are responsible for recognizing pathogens, and have been targets of selection in the past.

For her undergraduate honors thesis in the lab of Rauri Bowie at UC Berkley, Allison Shultz examined how the avian community of the Berkeley campus has changed over 93 years. This was part of the Centennial Resurvey of the UC Berkeley Campus Avian Community. Using survey data collected from 1913-1918, 1939-1940, and 2006-2007, she discovered that the species richness and functional diversity of the community had not changed over time. Furthermore, specialists were not replaced by generalists, as might have been predicted. However, the community composition changed significantly between all three of the different time periods, with species in each time period that preferred the habitats presented by the landscaping at each time. The results of her research suggested that by landscaping native habitats, native bird communities can persist through time or be restored, even in developed areas.

For her Master’s research at San Diego State University, Shultz studied several aspects of tanager plumage coloration. The tanagers are a diverse group of 370 species that live throughout Central and South America. They have a wide variety of life histories, habitats, and plumage patterns. One of the underlying themes of her research was the use of the avian visual model. Birds see quite differently than people do; notably, they can see UV coloration and can distinguish between colors better due to colored oil droplets on each of the cone cells. First, she used the avian visual model to assess the prevalence of cryptic sexual dichromatism – differences in male and female plumage coloration visible to birds but not humans. Second, she investigated whether it was changes in male or female plumage coloration that were driving the evolution of sexual dichromatism, and how male and female models of evolution differed. Finally, she looked for correlations between sexual dichromatism and different coloration mechanisms.

In addition, in collaboration with the lab of her Master’s advisor, Kevin Burns (also known as Team Tanager), Shultz helped to construct a species-level phylogeny of the tanagers. The team combined the phylogeny with data they have collected on tanager plumage coloration, songs, niches, and bills to look at how tanagers have diversified in relation to these phenotypic traits.