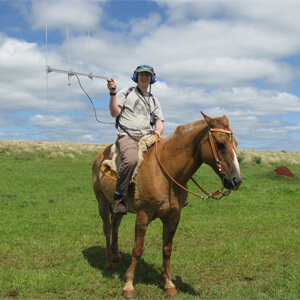 Alexander “Sasha” Keyel protects birds and the places they live.

With the possible exception of Homer Simpson, there are few people who can say that doughnuts played an important role in their lives. Sasha is one of these people.

“Growing up, my father would take my siblings and me bird watching,” says Keyel, a Tufts biology doctoral student and Provost Fellow. “I was five years old at the time and I only went because we got to have doughnuts on the way there.”

But, as it turns out, these trips were about more than feasting on ring-sized breakfast treats. For Keyel, they marked the beginning of a lifelong fascination with birds.

“As I got older, I became more interested in birds, especially while I was an undergraduate at Arizona State, and started bird watching on my own,” he says. “I’d see different types of birds and then look them up in a field guide.”

Keyel spent most of last summer bird watching. As a tern foraging assistant for the Massachusetts Audubon Society, he observed least terns-a species recognizable by their black caps, white foreheads, and yellow bills-living on beaches in Cape Cod. Keyel monitored the behavioral patterns of a number of these birds with the hope that the data he and his fellow researchers collected might shed light both on how these birds live and how they might be helped.

“We observed the nests to see, for example, what types of fish the terns brought back to eat,” says Keyel. “In reality, many other things happened, but we wanted to focus on their foraging behavior. For another project, we visited most of the beaches in Cape Cod and counted every single least tern nest. We were interested in seeing how they were doing, whether they were increasing or decreasing in population.”

Keyel continues to study birds as a graduate student at Tufts. For his doctoral dissertation, he plans to examine why some species of grassland birds have declined in population. As part of this work, Keyel is learning how to use Geographic Information Software (GIS) with help from Barbara Parmenter of the urban and environmental policy and planning department. This software will help Keyel identify suitable field research sites for the summer.

“Grassland birds are abundant, but in the last 40 years some species have declined by over 50 percent,” says Keyel, citing research conducted by the National Audubon Society. “One of the driving factors in this decline is habitat loss, and some species have been affected by this more severely than others.”

Keyel, who lists the Southern Cassowary, the Scarlet Macaw, and the Great Gray Owl as some of his favorite birds, is keenly aware of the habitat challenges facing many species.

“I think it’s very important to protect bird habitats,” says Keyel. “Take your Rubythroated Hummingbird. Each spring, many of these birds migrate from Mexico to Massachusetts. After they cross the Gulf of Mexico, they are tired. If everything on the south coast of Texas is housing developments and what-not, then they don’t have an appropriate stop-over habitat and they will die. This affects people here in Massachusetts who are anxiously waiting to see these birds. But it goes much further than that. If habitats are not protected, then many bird species will disappear and that’s a tragedy.”

Keyel, whose graduate studies are being supported by a GSAS scholarship, says the loss of such birds would have repercussions that go far beyond the birding community.

“We don’t just lose the beauty of birds, but these animals provide different functions in the ecosystem that we don’t always understand. A lot of these birds eat different invertebrates who, in turn, might eat pests. Therefore, if these birds are gone then there might be more pest outbreaks because you will be losing the natural control of them. All of these things and more make protecting birds important.”

(This article is part of a series profiling graduate students who have received financial support from the Tufts Graduate School of Arts and Sciences or School of Engineering.)